Discrimination can not only come in different shapes (racism, xenophobia, implicit bias, stereotypes etc.) but also manifest itself differently on a daily basis. In this panel discussion organized by the Diversity Team in D-ITET (D+ITET), the overarching goal was to acknowledge and to raise awareness for the existence of discrimination in academic institutions in Switzerland. Following the discussions of how discrimination manifests in academia, we brainstormed strategies on how to build an empathetic community that tackles institutional biases.


Our panel consisted of the following speakers:

Prof. Gabriela Hug: Full Professor at the Power Systems Laboratory at D-ITET, ETH Zurich conducting research on control and optimization of electric power systems. Winner of the 2019 Art of Leadership Award that honors innovative leadership that allows the reconciliation of jobs and families.
Estefania Cuero: Master’s Degree in Human Rights and Cultural Diversity and serving as a Diversity Consultant and Trainer. She is currently a Doctoral Student, with her research focusing on human rights in international cooperation at the university of Lucerne.
Christian Pierce: Previously an Industry Consultant for topics on diversity and currently the Racial and Ethnic Diversity Program Manager at the Competence Center for Diversity & Inclusion at the University of St. Gallen while pursuing his PhD focused on antiracism in multinational corporations.

The panel was moderated by: 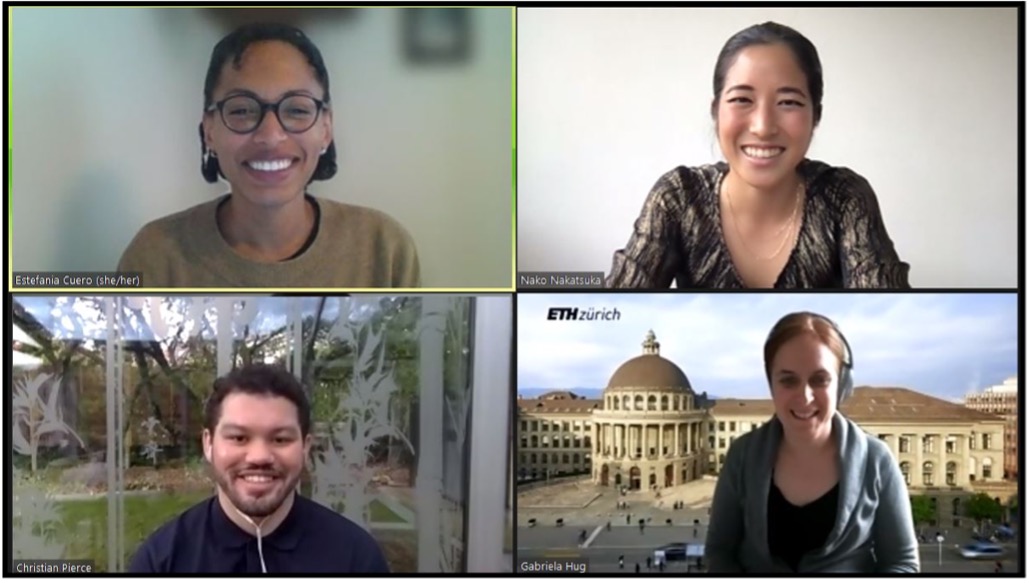 At the beginning, a poll was launched with the question: What is the maturity level of the fight for equity, inclusion, and diversity at Swiss institutions? The possible answers were on a scale from non-existent to very far developed.

Interestingly, while most of the audience chose the answer towards the belief that the maturity level is premature in CH compared to other European countries, some stated that the status is far developed. These differences in perspectives demonstrated that this is an important topic for discussion. It was noted that the late introduction of the women's vote illustrates the problem of CH facing the topic.


The discussion then continued following some broader questions to which the panel was prompted to give their perspectives.

Different Dimensions of Diversity: How can we address intersectionality? Where do we start the fight against discrimination?

Admitting that each and everyone is subject to their own biases is the best way to start acting against them. Rather than labeling groups, one could start by asking: "Who is most excluded, marginalized, and vulnerable?" Measures often address the more visible groups. As an institution, we must ask ourselves the question why voices of different groups are not heard. Understanding intersectionality begins by seeing a wider scope of diversity.

What are the strategies to raise awareness for the issue?

As an institution that serves as a role model for society, the University should have a vision and philosophy on the necessary steps to commit to actionable plans for equity and fairness. Further, a topic that was brought up was the lack of funding and financial support in programs that raise awareness for diversity. Individual leaders should initiate discussions on discrimination directly in their groups. Building empathy can only be achieved by amplifying oftentimes unheard voices. Furthermore, as many people as possible need to see what Swiss society can gain from diversity in areas that are still at a premature level such as inclusivity based on race, gender, sexual orientation, and migration background. However, an important perspective was to remember, that it is impossible to convince everyone, but decisive efforts must continue to elevate those who have been systemically oppressed.

What are stereotypes in academia, and more broadly in Switzerland?

Gender stereotypes were discussed as an issue specifically in CH where gender roles for men vs. women lack fluidity. For example, working women are criticized for not taking care of the children and conversely, stay-at-home husbands are judged for not having a socially acceptable job. In CH, ideas about what it means to be Swiss are very narrow, fully naturalized citizens with non-white skins are often still perceived as foreigners. It was mentioned that when going through the academic process, especially at ETH, people who do not conform to the able-bodied white cis male stereotype face challenging situations that they otherwise would not experience.

How can we avoid that certain groups (e.g. men) don’t feel threatened? How to avoid the argument of "reverse discrimination" when conversations of discrimination come up.

There will always be individuals who feel offended, but certain steps need to be taken to create a more equitable system. In fact, increasing justice will come with losing privilege for those who are currently privileged in an unjust system and are currently profiting. While it is a noble goal to have everyone support one perspective, ultimately, institutions should ask what voices that have been systemically oppressed must be heard. The fear of some of being left out/challenged by diversity should not discourage us from achieving justice. We need to reframe what is actually radical, such as ignoring issues of injustices and basic human rights.

Who is responsible for acting towards creating a more inclusive and equal institution? What are strategies for different actors in different positions of hierarchy?

Diversity and Inclusion are actions that are put in place to change the culture of an institution to serve everyone. Approach and remind people in charge who have the power and responsibility that they have a mandate to create an environment free of discrimination and can change circumstances for their team, employees, or community. It is in the Swiss constitution to treat people equally.

Bottom-up and grassroot initiatives such as reverse-mentorship are also powerful tools to trigger institutional change. The time until our peers might get into leading academic positions might be too long, therefore allowing knowledge to transfer upwards in an institution can catalyze inclusion.

Study referenced during the Panel Discussion: Sheepology: the postcolonial Politics of raceless racism in Switzerland